While most people prefer someplace tropical and warm, New York City in January turned out to be the perfect time to get discounted theater tickets. In fact, discounts abound in January, which is the month of big sales. While bargain sleuthing, I had a chance to wander the neighborhoods. Here are some highlights from my wanderings.

The Meatpacking District has exploded into a warren of tony boutiques with both high end designers like Stella McCartney and Alexander McQueen, as well as more affordable designers like Diane von Furstenberg and Trina Turk, as well as popular favorites like Vince and Theory. I was especially interested in the beautifully cut leather jackets at Yigal Azrouel, 408 W. 14th St at Ninth Ave.

Speaking of leather jackets, the undisputed leader of the pack, Rick Owens, has a new flagship store near the entrance to the Holland Tunnel at 250 Hudson St., decidedly off the beaten track, but home to some beautiful, minimalist designs, for which he is deservedly famous. This photo is from his Fall 2009 runway show. 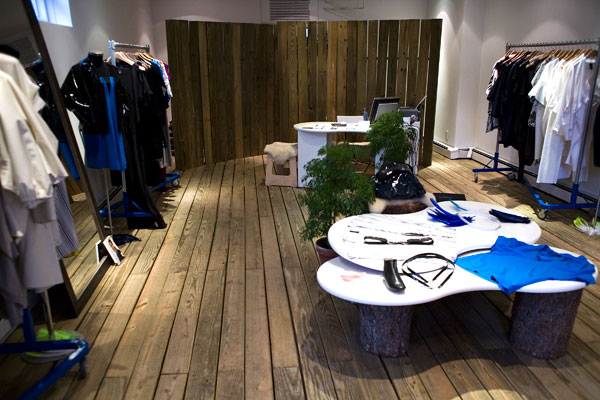 Maria Cornejo + Zero has two outposts worth seeking out. The first store at 807 Greenwich St. in the West Village, carries her signature drapey constructions with little hanger appeal that beg to be tried on for full effect. Kat and Ellen are the two helpful sales staff who are more than happy to help you try on everything in the store! There is a second store at 33 Bleecker St., north of Houston.

The Brooklyn Flea Market has moved indoors for the winter to the beautiful and historic Williamsburgh Savings Bank Building at One Hanson Place, the tallest building in Fort Greene. About 100 vendors offer vintage clothing, jewelry, furniture, and other collectibles on Saturdays and Sundays until March, when they move back outdoors in Fort Green and DUMBO. Susan Walker has great vintage jewelry at reasonable prices at her booth called Found. She also sells online.

All this shopping makes one hungry. Cafe Gitane, a neighborhood favorite in Nolita, has a newly opened sister restaurant in the West Village in the historic Jane Hotel, 113 Jane St., overlooking the Hudson River, with the same French/Moroccan menu at reasonable prices. With its vaulted ceilings and charming ambiance, it’s the perfect place for refueling.

The town of Venice, renown as the birth place of skate boarding, still retains a surfer dude vibe with the draw of the Pacific at its feet. Abbot Kinney, the main drag in Venice, is punctuated by trendy restaurants, cafes, galleries, and little boutiques. It is a good reason to venture to the west side of Los Angeles for a stroll.

Salt, 1138 ½ Abbot Kinney Blvd., is a little boutique with a definite sensibility, spare and elegant with sharply edited clothing from designers like Sonya Speciale, Trelisse Cooper, and Hache. The owner used to work at Noodle Stories on 3rd Street, but has her own strong sense of style.

Heist, 1104 Abbot Kinney Blvd., is a boutique for the hipster and the fashionista, with trendy but tasteful clothing from brands such as Nicholas K, Generra, Rag and Bone, and Isabel Marant.

Waraku, 1225 Abbot Kinney Blvd, is a sneaker store with many styles from Japan, including sneakers that sport traditional Japanese prints. They also carry tee shirts and some clothing and accessories from Japan.

Tortoise, 1208 Abbot Kinney Blvd, is a tiny gem of a housewares and gift store that feels like a gallery, with descriptive placards placed before unique functional pieces that exhibit a marriage of craft and beautiful design.

Jin Patisserie, 1202 Abbot Kinney Blvd, is the perfect place to stop for a cup of tea and a piece of cake. Sit in the quiet outdoor garden after choosing your treats inside a quaint converted beach cottage.

Minnie T’s, 1355 Abbot Kinney Blvd. is a boutique carrying higher end lines like Girbaud and Costume National that are for the fashion forward looking for a bit of edginess.

With its restaurants and boutiques, Venice is the perfect destination to while away an afternoon.